If you have a trip to visit Disneyland starting now through September 3, 2018, you are in for a HUGE treat. Pixar Fest started today at Disneyland Resort. PIXAR FEST AT THE DISNEYLAND RESORT (ANAHEIM, Calif.) – The Disneyland Monorail is zipping through the resort with a new Pixar-themed look to celebrate Pixar Fest! The blue train, inspired by Disney•Pixar’s “Finding Nemo,” features Crush and Squirt surfing alongside pals Nemo and Dory. Pixar Fest, the biggest Pixar celebration ever to come to Disney Parks, brings guests together to celebrate friendship and beyond at the Disneyland Resort from April 13 through Sept. 3, 2018. (Joshua Sudock/Disneyland Resort)

While in San Fransisco earlier this month, we got an inside look at Pixar Fest at Disneyland Resort. There is so much awesome in store! From parades and fireworks to special cuisine and Pixar themed attractions, any Pixar fan is sure to be thrilled.

It’s always fun to visit during themed events and get to taste some delicious treats. I mean, look at this amazing looking Pixar themed cake. This is just one treat that you’ll find during Pixar Fest (psst.. you can also dine at Alien Pizza Planet). Once your belly is full of these delicious Pixar themed treats, take a ride on Pixar attractions at Disneyland and Disney California Adventure! For 20 years, Disney Parks and Pixar Animation Studios have collaborated on attractions and experiences inspired by the colorful worlds of Pixar films. Guests at the Disneyland Resort now enjoy more than a dozen experiences that immerse them in the worlds of some favorite Pixar stories, including Toy Story Mania! and Finding Nemo Submarine Voyage.

Some of our most favorite memories have always been around character meet and greets. During Pixar Fest, you’ll be able to meet some of your favorite Pixar pals: Buzz Lightyear and Woody, Russell and Dug, Flik and Atta, Mike and Sulley, and Mr. and Mrs. Incredible. 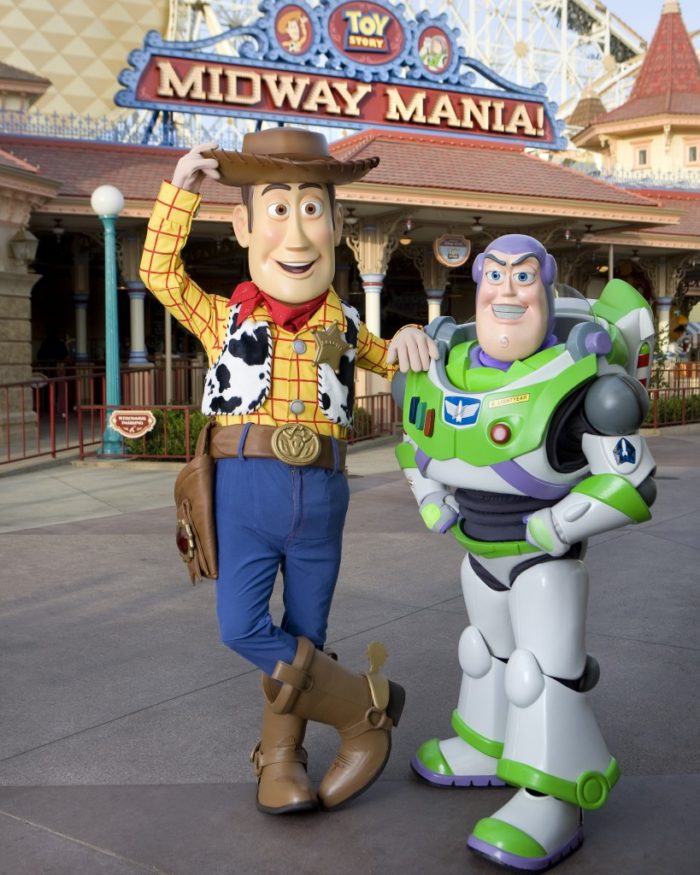 Now after a full day, there’s nothing like finishing your incredible visit with the Paint the Night Parade and the amazing Together Forever Fireworks. TOGETHER FOREVER FIREWORKS – Debuting with Pixar Fest on April 13, 2018, “Together Forever – A Pixar Nighttime Spectacular” will celebrate Pixar stories as it lights up the sky over Disneyland Park. Along with dazzling pyrotechnics and memorable music, a heartwarming story celebrates the theme of friendship, an ever-present concept in Pixar animation, connecting guests with characters they’ve come to know and love. “Together Forever” comes to life through projections on iconic park locations: Sleeping Beauty Castle, the water screens of the Rivers of America, the façade of “it’s a small world” and the buildings of Main Street, U.S.A. (Joshua Sudock/Disneyland Resort)

AHH, I’m so excited! Monsters University was my first ever Disney Press trip so it will always hold a special place in my heart. It’s so exciting to see Mike, Sully and Boo in the photo above for the Together Forever Nighttime Spectacular.

I’m looking forward to seeing the Incredibles inspired themed neighborhoods. We got a sneak peek of the concept and design behind the Parr family’s new home. I’ll be covering that and more in the weeks to come, so stay tuned. You’ll be able to find all of my Incredibles 2 coverage on my Disney tab.

Now.. last note on Pixar Fest. It is sure to be an incredible experience. It’s only at Disneyland Resort for a short time so be sure to schedule your visit soon!