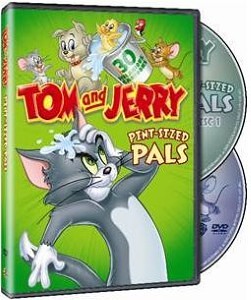 I have always loved Tom and Jerry. It’s such a classic! I rarely see it on TV anymore so when you can pick it up on DVD like this, it’s great. I received this in the mail the other day and popped it in for my kids. They loved it.

We were actually watching my first foster daughter too at the time. Her and her brothers had come over for a visit and were spending some time with us that afternoon. She is almost 3 now and her older brother is 5. They both loved it too.

This DVD is great..filled with 30 episodes. Here’s a bit more about the film:

Here comes Tom and Jerry and they’re bringing with them a group of adorable, sidesplitting sidekicks! Join Tyke, Tuffy and Little Quacker as they pile on the laughs and mischief in this 2-Disc collection of 30 hilarious episodes. Sit back and enjoy as these pint-size pals bring king-size comedy and delight to your whole family. From the babysitting bonanza of Tot Watchers to the playful pranks of That’s My Pup to the costumed chaos in Touche, Pussy Cat!, the silly streak of adventures and laughs just keep coming. So let’s hear it for teamwork, cooperation and a little bit of hijinks because comedy is always better with a buddy!

You can buy Tom and Jerry on Amazon:

I also have a copy that you can WIN!!

Giveaway is open to US residents age 18+ only and will close on 3/24/13 at 11:59 pm EST.
Enter via the Rafflecopter below. Good Luck!
a Rafflecopter giveaway