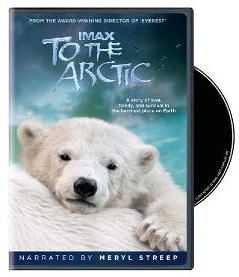 To The Artic is now on Blu-Ray – 3D Combo Pack with DVD and Digital Download!

I love movies like this. It takes you into nature to places you normally would never be able to go. It gives you a peek inside the lives of these animals that you’d never otherwise get to see. What a great teaching tool to have. Even if I didn’t homeschool, this would be such a great video to watch. But having it for homeschool teaching is perfect. It allows you to actually experience it without actually being there. Although in 3D you might feel like you are really there. 😉

Take a look at To The Artic description and press release below:

LOVE, FAMILY AND SURVIVAL IN THE HARSHEST PLACE ON EARTH
TO THE ARCTIC
ARRIVES ONTO BLU-RAY 3D COMBO PACK, DVD and DIGITAL DOWNLOAD ON MARCH 26
FROM WARNER BROS. HOME ENTERTAINMENT GROUP AND IMAX CORPORATION
All disc versions feature UltraViolet Digital Copy
View the To The Arctic Trailer here.

To the Arctic Press Release:

Prepare to be awed – and “aww-ed” when “To The Arctic” arrives onto Blu-ray 3D Combo Pack, DVD and Digital Download on March 26 from Warner Bros. Home Entertainment and IMAX Corporation. Narrated by Academy Award® winner Meryl Streep and directed by Academy Award® nominated filmmaker Greg MacGillivray of MacGillivray Freeman Films, “To The Arctic” stunningly captures with IMAX® 3D footage the challenges and triumphs of a polar bear family in the harsh wilderness they call home.
“To The Arctic” will be available on Blu-ray 3D Combo Pack for $44.95 and on single disc DVD for $28.98.  The Blu-ray 3D Combo Pack features a 3D hi-definition, a hi-definition and a standard definition copy of the film; and the single disc DVD features a standard definition copy. Both the Blu-ray 3D Combo Pack and the single disc DVD include UltraViolet, which allows consumers to download and instantly stream the standard definition theatrical version of the film to a wide range of devices including computers and compatible tablets, smartphones, game consoles, Internet-connected TVs and Blu-ray players.*
SYNOPSIS
An extraordinary journey to the top of the world, the documentary adventure “To The Arctic” reveals a compelling tale of survival. Narrated by Oscar® winner Meryl Streep, the film takes audiences into the lives of a mother polar bear and her twin seven-month-old cubs, as they navigate the changing Arctic wilderness they call home.
Captivating and intimate IMAX® footage brings audiences up-close and personal with this family’s struggle in a frigid environment of melting ice, immense glaciers, spectacular waterfalls and majestic snow-bound peaks.
“To The Arctic” is a co-presentation of Warner Bros. Pictures, MacGillivray Freeman Films and IMAX Filmed Entertainment, presented by One World One Ocean.