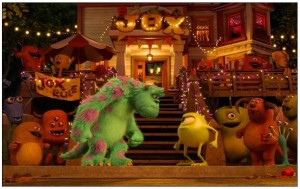 “First Contact” Clip – Get a glimpse of Mike & Sulley’s first morning as members of the Oozma Kappa brotherhood.

“ROR Material” Clip – Sulley’s capture of the Archie, the rival school’s mascot, just might be enough to make him worthy of joining the leading fraternity on campus: Roar Omega Roar.

“OK Initiation” Clip – Oozma Kappa’s sacred initiation ritual gets an unexpected interruption as the members try to welcome Mike & Sulley to their brotherhood.