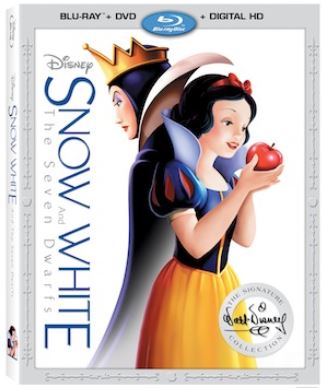 Disney’s Snow White and The Seven Dwarfs is NOW AVAILABLE on Blu-Ray!

I remember watching Disney’s Snow White and The Seven Dwarfs when I was a child and I’m delighted that I get to share the new Blu-ray with my family. The Blu-ray contains special features, too!

Forever enchanting and inspiring, Snow White And The Seven Dwarfs embodies The Walt Disney Signature Collection’s legacy of animation.  In this epic story of love and friendship, the kind and beautiful princess Snow White wins the hearts of the Seven Dwarfs and triumphs over the evil plans of a wicked Queen.  Share the movie called “The Greatest Animated Film Of All Time,” (American Film Institute) on Blu-ray February 2nd and on Digital HD January 19th, with special features for the entire family!

What a great movie to add to your collection! Head out and pick up your Blu-Ray copy of Disney’s Snow White and The Seven Dwarfs today!