Have you had a chance to take the family to see The Good Dinosaur yet? If not, make sure you take some time and go see it. It’s fantastic. And when you do see it, you’ll get to see this incredible Disney short Sanjay’s Super Team.

We had a chance to sit down and talk with Director Sanjay Patel & Producer Nicole Grindle. We got an exclusive look into the making of Sanjay’s Super Team! This short is a heartwarming story that talks about culture. Specifically Sanjay Patel’s Hindu culture. Nicole commented, “He [Sanjay] started out sort of turning his back on his father’s culture and wanting to fit in as an immigrant and embrace more traditional animation art. And after about 10 years at Pixar he got the itch to do something else and was introduced to South Asian art. ”

From there John Lassiter saw his art and wanted him to make a short film. Sanjay at first was very reluctant but was persuaded. Which, I can definitely see how persuasive John Lassiter can be. 😀 Sanjay even said to John, “Dude we don’t do this here man. This is not part of our brand.” But John disagreed and said that Pixar was always interested in telling new stories.

Before he agreed to do this project, Sanjay spoke with his Father. I love what his father said to him:

Then, I finally had a conversation with my father and he pointed out, Sanjay you know this studio had supported me and educated me for 20 years and he was like, “They’ve had this relationship with you and they’re finally asking you to try this thing and for you not to try would be bad karma.”

John Lassiter always believed in the concept. Here’s another little snippet that I think is better to quote in its entirety:

Luckily, what was great is I would say like John Lassiter, in particular, he just he really believed in the concept from minute one. He like seemed to draw out the concept before I even knew it. The original concept that I pitched to John included it was about a little boy in India that was ignoring the cultural stories that were carved on the temples all around them.

He had his nose buried in a Western style super hero comic and the short is about the boy appreciating his culture and then I told John because then John asked. He’s like, “Well where were you born? Where were you raised?” And I told him, “No I was raised in Whittier or in San Bernadino. A little bit of both in Southern California.” And then I told him how I spent every morning with my dad and his rituals andmy rituals and he really connected with both concepts.

And the first note from John was like, and you know Sanjay just tell your story about you and your dad.” He’s like, “If you just tell that as honestly as possible people will connect to it.” And so I just can’t diminish John’s support and his stewardship to not like kind of– I don’t wanna’ say like sell it out or cheese it up, but like he just made it so authentic and so true. He gave me permission to like say things that I wouldn’t say otherwise just because I think growing up in this culture I was always so afraid of exposing my identity, my parents identity, my parents community. My normal was always to just try to fit in and so it took John Lassiter to say to me like, “No Sanjay your story, your parent’s story has value here. You have permission to tell it.” I’m super grateful.

Sanjay says that he doesn’t feel like the story just happened overnight but yet was a “long gestation” and even an “evolution of me as an Artist and me as a dude.” I can imagine that telling this kind of story would make one feel very vulnerable. Sanjay commented that he was scared to bring his identity, culture and “this thing that was so precious to my parents and my community to work.”

I, for one, am sure glad he did. Sanjay’s Super Team is an incredible short film with so many emotions. It was incredible to talk with Sanjay in person. He was so humble and gracious. In fact, he didn’t want his name as the character or in the film’s title. He thought people would think he was an “egomaniac.” But they convinced him that it had to be “little Sanjay” represented. I loved hearing him talk about the process and how the story came about. He went on to say that he was still completely shocked, even 3 years later, that they were able to tell this story in a way that was sincere.

We were able to talk about cultural differences, honoring your culture and what Sanjay and Nicole would like kids that are children of immigrants to take from the story. Nicole commented that she loved how the story bridges cultures. Sanjay added, “If it’s cool, it will just connect and I think there’s a subtle thing that happens when people can sniff that out. And it, it just shows up. I don’t know. I just think the way we made the short just know it has my thumb print on it. It has my dad’s thumb print on it. That matters. People can smell something that’s authentic. I can at least.”

There were so many awesome things about this interview that I think are better directly quoted than me trying to paraphrase. This next snippet is talking about when Sanjay’s dad first saw the short:

Sanjay: ..it was just the 3 of us and there was a camera crew taping it.

Nicole: But it was pretty intimate. It was sweet because he was all business at first you know. He wanted to come and […] watch the film and say, “Yes it’s very good.” And then when we started talking about he was proud of Sanjay and that’s when he went over the edge.

Sanjay: He got super emotional.

Nicole: Yeah. And I think he’s a very hard working guy. He works 7 days a week, 24-7, he runs a motel. And here his son not only was thanking him, but understood who he was and what had sustained him. And I thought how can that not be emotional right? To have your child say, “No I see what you’ve been doing and I appreciate it.” So it was pretty emotional.

Another awesome thing about being in this interview is to see how other’s reacted to the short. We have a very diverse “melting pot” in America and that’s what makes our country so great. We also had a diverse group of bloggers in the room. It was just amazing to see how this short touched the hearts of so many. Sanjay pointed out, “… if you remember the movie starts out in a box. I grew up in an immigrant box. In an immigrant boxes you need all the riches of your culture be it of Africa, Korea all behind in the old country and you come as an immigrant into a rented apartment or whatever, whatever place you land. There’s no detail. It’s kinda’ like this room. It’s just a soulless kind of box.” I thought it was such a cool insight.

Of course, we also talked a bit about how they created the short and what went into it. Nicole commented that they were going for “something that was epic and was supposed to represent enlightenment.” Their challenge was finding a way to do that. They were given the chance to just “cut loose” and had their crew just “push the limits of the tools” they had. They used “epic angels” and wide lenses.

We talked a bit about religion being in the film. How that’s not a normal, typical thing for Pixar to do.

Sanjay: But now in hindsight I could see how it’s a really special thing to invite people into see something that maybe they wouldn’t be exposed to. It really feels like a privilege to show people a part of the community that isn’t stereotypical, but something that’s really honest and true to some people in that community and their experience. I think it’s a really cool thing.

Ok, one last interesting fact about the movie. I tend to just get wrapped up in something and don’t always notice the little details. Did you notice that there was barely any dialogue in the short? Nicole comments to that and says that it is party of the “tradition” of the Pixar stories. And when she said that, the lightbulb went on and I realized it definitely was a tradition with these shorts. Which is so awesome. I love how they can tell a story, can touch hearts without words.

Nicole went on to say that they “try as much as possible not to have a lot of dialogue because it is a tribute to the pure art of animation and visual story telling. So that is part of the tradition. There is some dialogue with the TV and then his father does speak at the very end.” 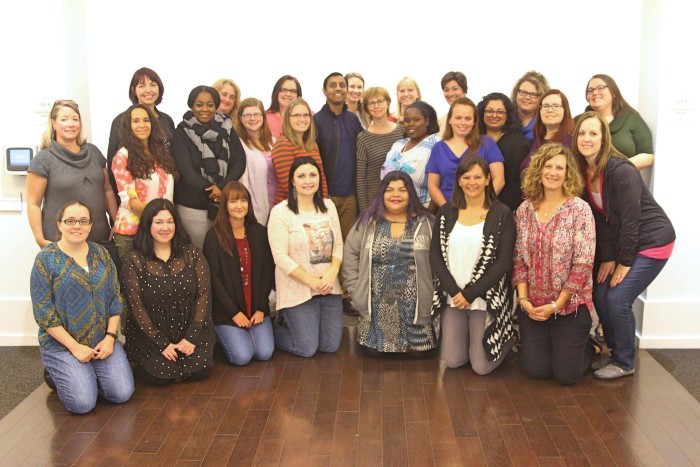 I hope you enjoyed getting this exclusive look at the making of Sanjay’s Super Team. It was just so awesome to be able to chat with both Sanjay and Nicole.