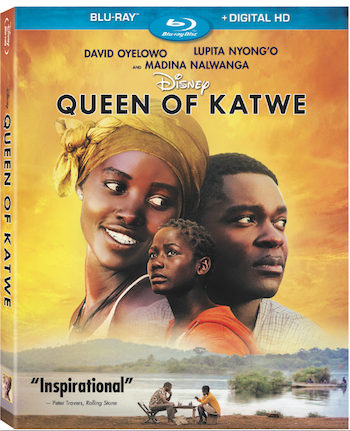 Queen of Katwe is now available on Digital HD!! And you don’t have to wait long for the DVD. Releasing on Blu-ray and DVD on January 31!

Have you seen it yet? The kids and I watched it the other night. So inspiring!

Home audiences will cheer for Disney’s Queen of Katwe, which has earned widespread critical acclaim. Based on the vibrant true story of a young girl (Madina Nalwanga) from the streets of Uganda whose world changes when she is introduced to the game of chess, and, as a result of the support she receives from her family and community, is instilled with the confidence and determination she needs to pursue her dream of becoming an international chess champion. It is a remarkable story of perseverance against all odds that will leave viewers feeling humbled and inspired. According to director Mira Nair, “The triumph of the human spirit is not to weep for what we don’t have but to focus on what we do have and allow that to take us to a place we never imagined possible.”

Disney’s heartwarming and triumphant tale, Queen of Katwe, is now available on Digital HD and will be available on Blu-ray™ Jan. 31!