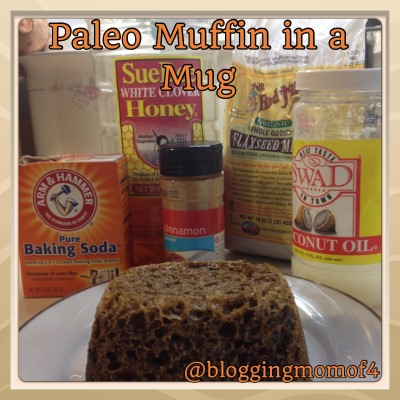 Paleo Muffin in a Mug

Lately I have been craving bread. Bread, bread and any kind of bread! I was doing so well on Paleo and then I went on a trip to L.A. I tried my best to eat Paleo but it’s not always easy when you’re away from home and being tempted by yummy delicious foods. I thought that it’d be easy to get back on track but not so much.

Since then, I’ve had a terrible time getting my cravings in check. I found this recipe for Paleo Muffin in a Mug. To me, it’s not as much of a muffin as it is a form of bread. You make it in the microwave so it’s quick, easy and you can satisfy your carb cravings. None of the other Paleo breads that I have tried have had this consistency. I love that it’s moist and fluffy. It’s just not as dense as other Paleo breads and I love that about this one.

There’s one little caveat, I did not like this Paleo Muffin in a Mug by itself. I thought it tasted a bit bitter. I thought maybe there was too much cinnamon but my husband said that the cinnamon was fine. So you be the judge and alter as needed.

I made one muffin and then sliced it to use as bread. I got about 4 slices from the one muffin. I made some tuna fish, put it on top of my Paleo Muffin in a Mug bread and it was delicious! I couldn’t believe how good it tasted. Yum, yum, yum! I would not eat this one by itself but I sure liked it with a sandwich type topping.

Try out this Paleo Muffin in a Mug!

**Update** I kept trying to figure out why the bread tasted bitter…I adjusted the amount of baking soda and it’s now perfect!! Could even eat it by itself. I also cut down the cinnamon and even used 1/2 coconut flour, 1/2 flax seed when it calls for 1/4 Cup flax seed. So just some updates to the recipe. I am going to change the amount of baking soda in the recipe so the recipe below will have that change. Enjoy!

Paleo Muffin in a Mug

Topic: Paleo Muffin in a Mug