Are you enjoying the Rogue One coverage so far? Today we’re chatting with Ben Mendelsohn who plays Orson Krennic in Rogue One. 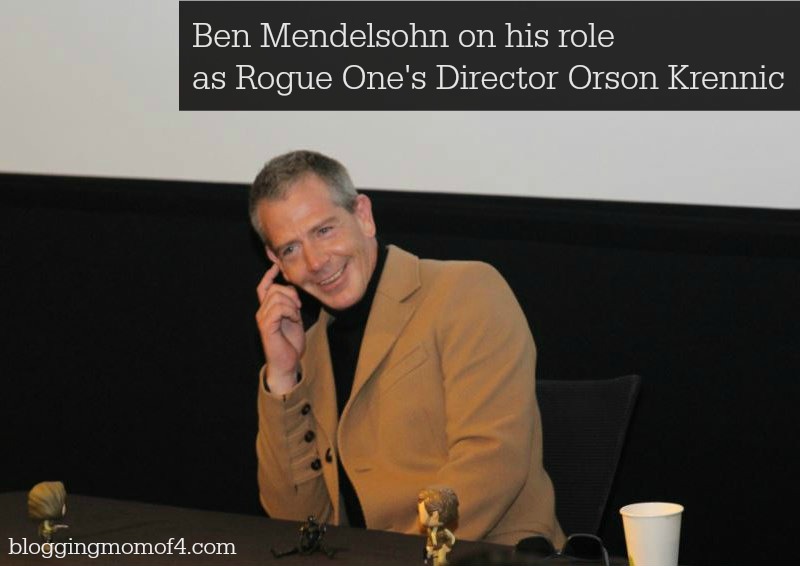 Ben Mendelsohn was so fun to talk to. I love his sense of humor and just overall presence. It’s really hard to pick and choose what to share as a direct quote and what to paraphrase. He’s just so funny and I hope that comes through in my coverage of our interview.

First, Ben tells us a little bit about his character Orson Krennic.

He is the director of military intelligence and operations. And for the purposes of our film, it means he’s the dude that built the Death Star and is bringing it to its final brilliance.

I doubt there are many non-fans of the Star Wars saga. Just like you and me, the cast are also fans, including Ben. So did he ever imagine that he’d be on the Empire side?

No. No, I mean but that’s the folly of youth, isn’t it? No one imagines that they’re going to end up on the side of The Empire. But you get older. You come to realize the peace and stability in the galaxy is worth fighting for and that all these airy, fairy ideals of The Rebellion are very well and good but what happens when they get into power?

No, I didn’t but I wish I could have told myself at various points through life, don’t worry. One day you’ll be in Star Wars. That would have been good turn but there you go.

One of my favorite quotes form Ben and one that I paraphrased and tweeted out live at the time of the interview.

Wish I could have told my younger self, don’t worry. One day you’ll be in Star Wars. ~ Ben Mendelsohn “Krennic” #RogueOneEvent

Ben plays a terrific bad guy in this role. But does he prefer the evil roles over the good ones? He commented that there are a lot of emotions that you have to work with when you’re playing a bad guy – angry, resentful, enraged, etc. and that he considers in a “real honor to be playing bad guys…”

What I love best about his answer is when he said that he doesn’t associate himself with his characters but yet he’s ok if everyone else does. I think that’s such an important thing for any actor. Especially when they are playing a bad guy or evil role. Director Gareth Edwards told us about when he sat down to talk with Ben about the role. We asked Ben to share his side.

Well, I sort of got summoned to go and meet. And he basically told me the story and then he told me who he wanted me to play. I was just a little concerned. I thought like are you sure? But I was incredibly flattered and I wasn’t sure whether he’d actually really –.

I mean, it felt like he’d said you know –. It was one of those things that he got a little bit foggy because I started to get a little bit overwhelmed by it. So you know I was pretty sure by the end of it that he had offered it to me. And you know and I’d rang in and reported as much. But then I had to keep it quiet for a very, very long time. But yeah, that’s about it.

Now Star Wars has some pretty great villains. What does Ben think about Orson Krennic vs. Darth Vader?

Well, I think you know I think my guy is more like you know –. I mean in a personal sense? I don’t think there’s any competition in a one-on-one. But I think the Empire being what it is Darth’s pretty good but I’d hate to see him go up against a couple of squadrons.

I’d hate to see him go one-on-one against the Death Star. And so really that’s about influences where you sit. You know Emperor’s here and how close can you get? And I think Krennic is going for that number. I think he regards Darth as the Emperor’s kind of pet and he’s all fascinated with him. He’s a very impressive dude but there’s a bit of this going on there as well.

I mean what does he do? He’s like a very important figurehead. But in terms of the strategies and what we actually have to get done. He’s a great car, you know? But someone’s got to drive it.

We heard from other members of the cast that they grew to be a family. Was it the same for the villains of the group? Did Ben feel the family camaraderie?

You know what you can say about the Empire is at least you know where you stand. I mean you know it’s, no I mean there was –, and I think they did. I think those guys did form that [relationship] because they went through a lot. And you know obviously in this sort of balance of shooting those guys are spending a lot of time together. The Empire’s a bit more of a solitary place in that way.

But I had a good group with me. Like I had the dude that’s my second in command and the Death Troopers with me. But the atmosphere on set it changes but you can’t have a bad day. You look up and you see Storm Troopers around and stuff like that in your workplace. You really can’t have a terribly bad day.

No spoilers but there is a line in the movie where Orson Krennic was looking for a child and says, “Find it.” Its like a turning point when you’re not sure how you feel about Orson yet. But with those two words, you now hate him. You know he’s evil. How did Ben feel about that part in the film and how did he prepare for it?

When we were going into this the main thing that I looked at was just the officers in the original film. And then you sort of have to do a bit of a rewind and think about what it was like when they were making it in ‘77 because they were all very British. And it’s all very sort of Royal Shakespeare bad guy kind of very straight kind of stuff. So I wanted Krennic to sound like enough of one of those guys.

But then after that and that costume, you know what? I mean you put that costume on and you’ve got those boots on and you have that cape. And all of a sudden you just feel that power. Basically the thing about those guys like the thing you saw last night is that from his perspective they’re just in the way. They’re just in the way. And I mean, I’m sorry but she came out with a gun ready to shoot me.

Like what are they thinking? And so yeah, but that was a very, very good set up. I thought that that set up told us a lot about what we were doing in this film.

It’s a role and Ben plays it beautifully. But he’s a father. So how did he get in that mind frame to deliver that performance?

Yeah because, because look, at the end of all of this I never ever confuse the two. There have been plenty of things I’ve done where you feel uncomfortable or you feel a whole bunch of things because you know they are but they tend to be a lot more of the up close and personal things. But I never confuse the two. It’s sort of like, we’re going to play, here’s playtime.

And were going to play cops and robbers or whatever. And then now we’re back to normal. So you’ve got to be able to do that I think with that. But I think the thing that people find the hardest is how do you take on these things knowing that people are going to look at you and go, I hate that guy? But I think when you’ve been acting for a little while you hope that people feel you in whatever way that is.

And if you have a respect for the thing as its whole then they can feel you like this or they can feel you like this. As long as they feel you, you know. So when you say, find it. And I have to say, when the first time I heard that when I saw it, I remember going, oh that’s so wrong. Find it. And I hated him at that moment too. That’s a really clever set up I think. I don’t know if they had written it as find it either. I don’t know, I’m trying to remember.

Someone from our group commented that it sure was a great line.

Yeah, it was a great line. I don’t think it’s mine but damn. Ben says the most difficult part was just getting into it in the beginning. It sounded like he just gave himself a few pep talks of “you’ve got this” to really get him past it. I can’t even imagine having any sort of role in Star Wars but he plays such an incredible role in Rogue One. I think I’d need a bit more than a few pep talks. Did Ben have a favorite scene? He fills us in on his favorite. If you haven’t seen the movie yet, this is a scene in the beginning of the movie where Ben finds Galen, played by Mads Mikkelsen.

That scene you saw with Mads, that’s amongst my favorite. That was a brutally difficult day. We were in Iceland. It was absolutely prohibitively freezing. And the weather changed greatly. There’s a scene with Darth Vader that it is pretty special. That’s pretty special.

And there’s also another scene which you guys haven’t seen I think that it’s in the Imperial territories that I am, that was wonderful to do as well. Oh what another great interview! I hope you’ve been enjoying the #RogueOneEvent coverage. It’s been so fun to share it with you. ROGUE ONE: A STAR WARS STORY follows a group of unlikely heroes in a time of conflict who  band together on a mission to steal the plans to the Death Star, the Empire’s ultimate weapon of destruction. This key event in the Star Wars timeline brings together ordinary people who choose to do extraordinary things, and in doing so, become part of something greater than themselves.