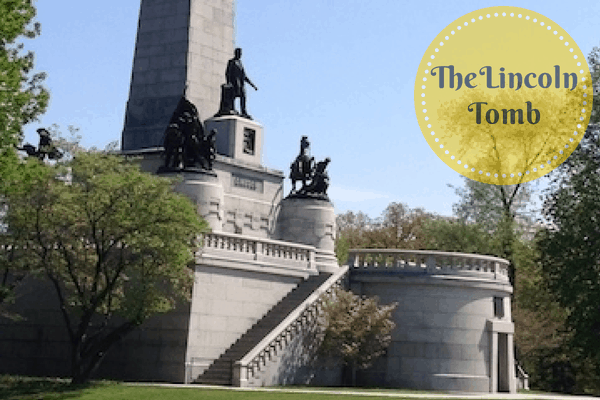 A visit to the Lincoln Tomb and the War Memorials is a must see if you’re ever in the Springfield, IL area. As with visiting Abraham Lincoln’s Home, the Lincoln Tomb is free and open to the public.

The life of President Abraham Lincoln was tragically cut short by an assassin’s bullet on April 15, 1865,. At the wishes of his loving wife Mary, his remains were returned to his home town of Springfield, Illinois. The Lincoln Monument in Oak Ridge Cemetery was erected to preserve the memory of President Lincoln’s selfless dedication to preserving the United States of America.

Also located within Oak Ridge Cemetery are three memorials honoring Illinoisans who answered their country’s call to service in World War II, the Korean War, and the Vietnam War. The union preserved by Lincoln was defended by these courageous men and women in the global conflicts of the mid-20th Century.

Obviously, this is a huge part of our American History and being able to see it in person is awesome. I loved that we were able to bring our kids and let them experience the memorial.

If you’re looking for somewhere to go yet this summer or for a great homeschool field trip, consider Springfield, IL. There’s so much learning to be had between the Lincoln home and Lincoln Tomb. While you’re there, don’t forget to rub Abe’s nose for good luck!

As stated on the Lincoln Tomb Website, hours are:

Here’s some of the pictures we took while touring inside the Lincoln Tomb :