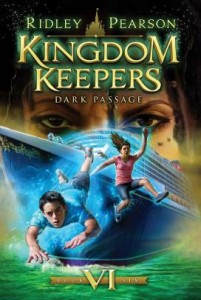 My oldest is a huge fan of Kingdom Keepers. He started the series a few years ago and read through them super quick. I just told him that the latest book is on sale today (Kingdom Keepers VI Dark Passage) and he was excited. I love finding great books for my kids to read. Ones that I know are ‘safe’ for them and that they will actually be interested in. Ones that will deepen their love for reading! It’s so important to establish that when they’re young.

If you’re looking for a series like that for your teen, take a look at Kingdom Keepers:

The Kingdom Keepers (young teens who were tapped as models for holographic Disney theme park “guides”) and their friends have uncovered a startling truth: Maleficent and the Overtakers (Disney villains) are plotting a catastrophic event that could have repercussions far beyond the world of Disney. Aboard the Disney Cruise Line’s inaugural passage through the new Panama Canal, the Keepers and their holograms uncover a puzzle hidden within the pages of a stolen journal. The point of that puzzle will reveal itself in the caves of Aruba, the zip lines of Costa Rica, and the jungles of Mexico. A destructive force, dormant for decades, is about to be unleashed—and the Kingdom Keepers are to be its first victims.

Now, for the first time, readers get the chance to help write the seventh and final book in the series via the Kingdom Keepers Insider app, launching April 2nd! Available on all mobile devices, e-readers and online, the app will provide a groundbreaking interactive fan experience for readers of the Kingdom Keepers series, allowing them to follow along as Ridley Pearson writes, voting on plot points, character involvement, and locations—even contributing ideas for dialogue! Plus, there will be writing contests based on the previous book in the series and judged by Ridley Pearson, promoting writing and literacy in a safe environment with characters readers already know and love! Learn more at www.kingdomkeepersinsider.com.

Ridley Pearson is the award-winning author of multiple adventure series for (young-ish) readers, including The Kingdom Keepers, Steel Trapp and with Dave Barry, Peter and the Starcatchers. Ridley is also a best-selling crime novelist of more than 25 titles, which have been translated into 22 languages and distributed in 70 countries. Pearson was the first U.S. citizen to be awarded the Raymond Chandler/Fulbright Fellowship in Detective Fiction at Oxford University. In 2008 Ridley served as a visiting professor at Fudan University, Shanghai, China. In 2013, Ridley was awarded Missouri’s Quill Award and inducted into that state’s Writers Hall of Fame. As a “full time dad and husband,” Ridley, along with his wife, Marcelle, live with their two teenage daughters in St. Louis, MO. Find him online at ridleypearson.com and on Twitter: @RidleyPearson

May be coming to a city near you! Check the Tour: