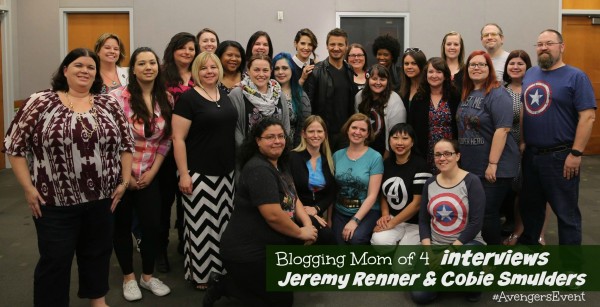 Ok, so by now, you’ve all seen Avengers: Age of Ultron correct?? I hope so anyway! 😉 If not, scratch out some time to see it. You will not be disappointed.

Make sure to read up on my other #AvengersEvent coverage as well as my thoughts on the movie. All can be found under my Disney tab. And then stop back because I’ve still got more posts to come this week!!

Next up in our interviews is Jeremy Renner and Cobie Smulders who play Hawkeye and Maria Hill. Both are amazing in the movie. I love how we get to see more into both of these characters.

Jeremy Renner is amazing on and off screen. One of the things I remember about him during the interview is his laugh. I have a hard time explaining it but it’s infectious.

And Cobie.. I loved her since How I Met Your Mother. Let me tell you, she is just stunning in person. Beautiful and hilarious. The two of them together in this interview was very fun!

So let’s get to it.. now, I warn you.. there is a bit of a spoiler in the interview regarding Hawkeye. I will put that part towards the end so that if you haven’t seen the movie, you can avoid it but yet still read the rest of the interview. I love the scene where you’re like coughing testosterone — How was it to film? To be this awesome woman agent with all men?

It’s fun. It’s very fun. It’s interesting because people talk about that a lot with these films that there’s few females. And it’s a male driven film. We all get along so well. I don’t feel that divide on set. All the guys are really great and nice and handsome, [laughter] every single one of them, some more than others.

It is fun. I mean we have some other strong females, Scarlett [Johannson] and now Lizzie [Olsen]. It’s just nice seeing more women coming into these films. – Cobie Smulders

It’s good for us too. – Jeremy

Seriously. I mean I love [Chris] Hemsworth. But, um, you know– [LAUGHTER] -Jeremy 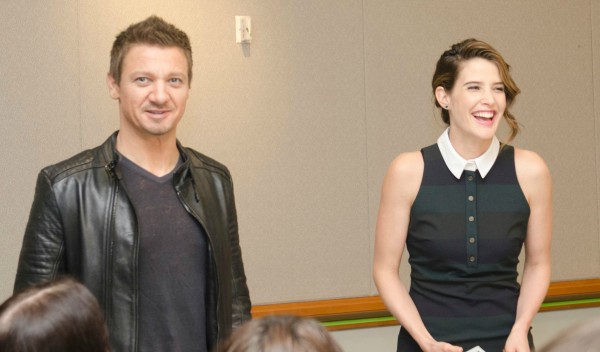 I have a question for Cobie. The last time we talked about the first Avengers in New York you said that you thought you were just going to be serving coffee in the very beginning. You’ve been in several movies since then. How did you feel about entering the role for this movie?

Well, I feel like I might still be making coffees. But at Stark Tower there might– just a really nice espresso machine. So it’s like really fancy coffees. No, I don’t think I’m serving coffees anymore. It’s really cool. In the comic books Maria Hill has her own story line. And she’s very smart. She’s very independent. She’s very controlling. It’s cool to see how, now that this team is sort of under Tony’s protection and funded by him how that’s working in terms of privatizing security and her dealing with that.

So it’s fun to sort of be a part of the team but also to be like managing everybody as well or trying to anyway. -Cobie

Did you have a favorite scene to shoot for the film?

I don’t believe in favorites. I think they’re all equally torturous and wonderful. -Jeremy

I shot all of my scenes in Stark Tower, in the Avengers Tower now it’s called. And I’m sure you guys all saw the movie. How how amazing was that set? And it was all one set. Anytime that anyone was in the lab that was still on the same set.

And where Tony was working on his suits was right below it. And then the bar was just a few feet away thank goodness. To me, it was really cool to play all these scenes out in one location. And it really sort of helped with performance as well. -Cobie 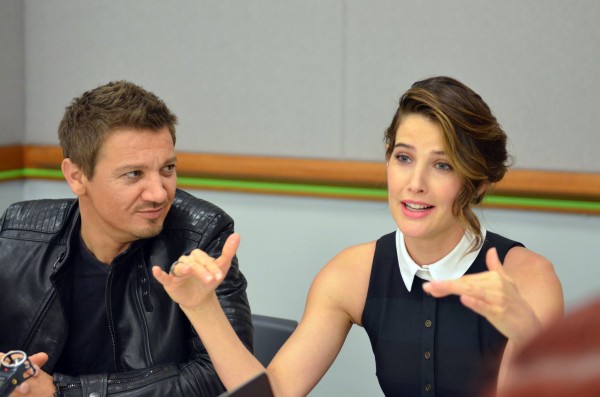 How how did you physically prepare for the movie? And then what was the hardest scene for you both to film?

It’s a little tricky and also to be precise with it and the camera angles. It’s just technical. That makes it quite difficult because all moving parts. But to me I think it’s fun because it’s like a dance. And there’s a technique to all that stuff. But it is quite arduous. -Jeremy

Every time these movies come up, a couple months before you start working out. And I did a few stunts in this one, not as much as the super heroes in the film. But it’s good to get in shape. And in terms of the most difficult scene I feel like in this movie there’s a lot of scenes where we’re all in the scene together–  -Cobie

Those are all difficult scenes, right? -Jeremy

Yes, we have a lot of fun together. So it’s a hard group to wrangle as well. But these scenes, we take multiple days to shoot them because there’s so much coverage. On the third day you’re like, wait, what are we doing? And what is the scene? And what did I say? You sort of feel like you’re in this Groundhogs Day where you’re doing the same thing over. But you’re trying to remember exactly how you did it the day before. And so that’s challenging. That’s not a hard thing. But it can get a little bit tiring at times. -Cobie 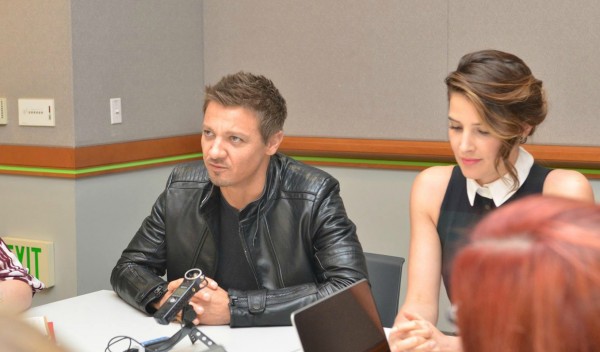 Jeremy, you had a bigger role in this movie. And I have a feeling that as soon as it comes out and all the kids see it and all the parents see it that your character’s just gonna explode. I can see it being big. How do you feel about that? Are you ready for that?

I don’t know what that ultimately means. I mean I think the greatest thing that I get out of this whole experience of being in this giant movie and the one prior is artistically it doesn’t really hit a lot of nerves in my body. As soon as a five year old ran up to me that changed the game. I’m like, oh, wow, I have a five year old. And that’s amazing. And then here comes his dad in the same costume.

[Laughter] A little creepy. That’s the creepy part. But when the little kids come on up to you, it just crushes me. I’ll stop and do anything for a little creature. I’m crazy about them. So I welcome is the short answer. I welcome that. If it’s the little kids. [Laughter] The grown ass people, stay out of the costume, man. Come on, I love you. [he laughs] I’ll see you at Comic-Con. That’s okay then.

Like we’re at Starbucks, dude. You know what I mean? I’m not kidding. We just happened to be in costume. Yeah, really? [we all laugh at this] -Jeremy 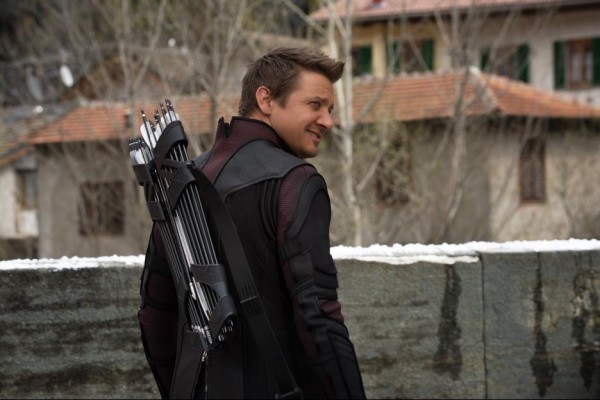 Where do you want to see each of your character’s go in the subsequent movies?

You know, there’s so many different directions. There’s a plethora of comic books and cartoons and all these things that they could pull from. So for me personally it’s hard to say. It’d be cool to learn more about Marie Hill’s past and how she came to be where she is. It’s very much under Marvel’s control. And they’re very great at choosing great story lines. So we’ll see. -Cobie

I have a lot of ideas. But it doesn’t really ultimately matter. I think the relationships are kind of what are interesting in this world with others. And I’d just like to see the new ones start and others fade or deepen. I think that would be interesting. That’s what I’d be curious about the next upcoming ones. -Jeremy 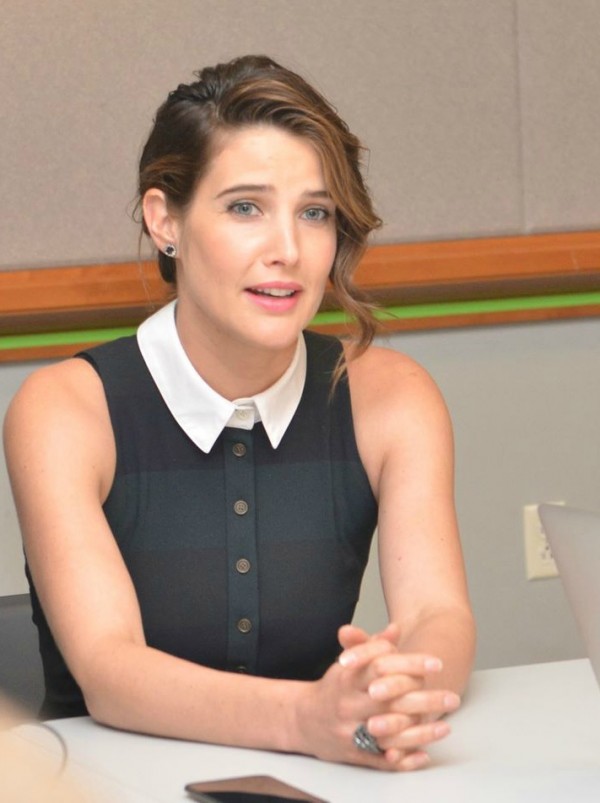 She always hits him. It’s like magic. That’s the great thing about being in these movies. You can shoot over here and that guy dies. [Laughter] Always hit your mark. It’s very exciting. -Cobie We got to see Hawkeye at home. And I think we’re all ready for Maria Hill at home.

Oh, I feel like she sleeps in the Avenger’s Tower. Like her desk just kind of converts into a bed. And she gets her two hours. And then she springs back up and gets back to work. -Cobie

I was wondering. Do you have an idea of what you think Maria Hill is doing when she’s off? 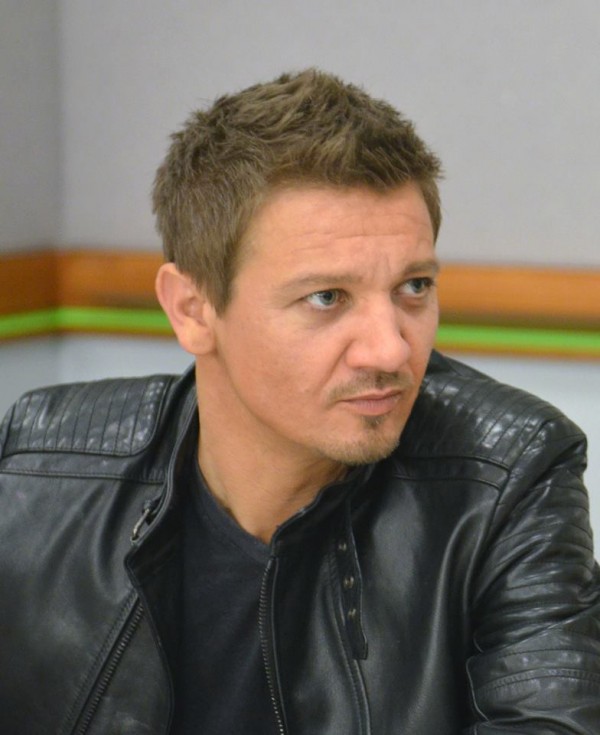 In the movie, I saw you as a great role model for dads. Do you see that in your character?

As far as a role model I don’t know. Those are always hard to talk to. I think you’d have to ask my daughter if I’m a good daddy role model.

It’s a cool aspect to the character that was brought up. It was brought up actually for the first Avengers but not even nearly as cool because they were gone. But in this one, it’s fantastic sort of reveal that he’s a daddy. And that’s what he fights for ’cause I think it’s a very emotional for me personally it’s a very emotional thing. I think just in general that audiences can kind of grab on to that. ‘Cause it’s something very real. -Jeremy Renner