Bring The Grinch Home for the Family

You can already watch Dr. Seuss’ The Grinch on Digital and via the digital movie app MOVIES ANYWHERE. On February 5, 2019 families can bring it home on 4K Ultra HD, 3D Blu-ray™, Blu-ray™, DVD and On Demand! From Illumination and Universal Pictures Home Entertainment, the film based on Dr. Seuss’ beloved tale about a cynical grouch who goes on a mission to steal Christmas from others only to feel his own heart grow three sizes larger through unexpected friendships is one the whole family can watch and enjoy.

This is such a great take on a classic and I love the new updated music. They remixed some of the classic songs. It’s the same grinch, but there’s definitely a new twist on the tale. It’s so good. 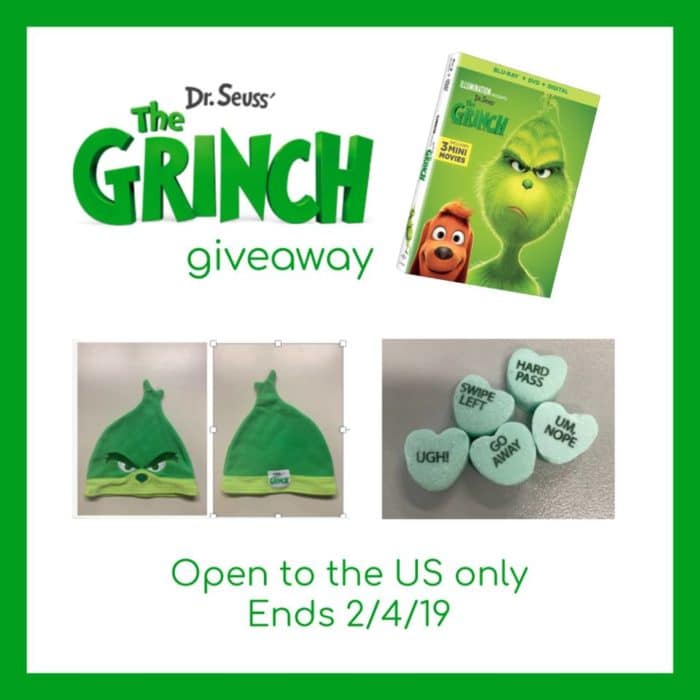 And one of you will be able to bring it home along with a fun prize pack! The prize pack includes:

All you have to do is enter on the rafflecopter below. Good luck!
*Giveaway is open to the US only and ends 2/4/19

Giveaway ends February 4th at 11:59 PM Central Time. No purchase is necessary to enter. Void where prohibited by law. The odds of winning are based on the number of entries received Open to US, 18+ only. Confirmed Winner(s) (by Random.org) will be contacted by email. Winner(s) have 24 hours to respond before a new winner is chosen. No purchase necessary. Void where prohibited by law. The sponsor(s) will be responsible for product shipment to winner(s) of this giveaway. My blog is not responsible for product shipment/delivery. This event is in no way administered, sponsored, or endorsed by, or associated with, Facebook and/or Twitter, Google, Pinterest. This disclosure is done in accordance with the Federal Trade Commission 10 CFR, Part 255 Guides Concerning the Use of Endorsements and Testimonials in Advertising.