Whether you are a die hard fan, not a fan at all (pffft) or somewhere in the middle, there’s no way you haven’t heard about Star Wars The Force Awakens. Well maybe if you’re living under a rock or somewhere with no wifi access.

This last Tuesday, Review Dad and I went on a top secret mission. We were invited to attend a special screening of Star Wars The Force Awakens. Yes, you read that right! We were among the first to see the new Star Wars movie!! If you’re a fan (and I know you are), I’m sure you can understand our excitement. The theater where it was held was almost two hours away from us. But let me tell you, it was SO worth the drive. I think we would have driven further even.

So you get our excitement level. We are seeing Star Wars The Force Awakens three days EARLY! Eeeeeks!!! We take our seats and patiently wait for the movie to start. Then it happens. The opening crawl begins. I wanted to scream and clap! I was so excited! But will the movie live up to our high expectations? Will we like the new characters? Will we like where the story goes? How about the director? A director can make or break a film, right?

Well let me tell you, the answer to all of the above is a resounding YES!!! I absolutely loved the movie. I loved how it stayed true to the spirit of Star Wars. I think J.J. Abrams did a phenomenal job directing and pulled amazing performances out of the cast.

As I mentioned above, I think J.J. Abrams did an incredible job. After the movie, Tim and I had 2 hours to discuss our thoughts. We spent a lot of time talking about the acting in the film. It was just incredible. Especially from the new characters who were played by relatively unknown actors.

There are a lot of new characters so I’m going to narrow it down to my top 5 picks. Don’t worry.. no spoilers here! I absolutely LOVED BB-8. Ok, so I know I’ve used the word love a lot so far but there really isn’t anything that I didn’t like about this movie. BB-8 is an awesome new character that kids are going to love. He’s like an adorable little puppy. I have always been a fan of R2-D2 and BB-8 is the perfect new droid to carry on the droid legacy. But don’t worry, R2, there’s enough room in my heart for you both. I really like that we get to see the human side of a Stormtrooper. Finn may not be my favorite of the new characters but he’s funny, endearing and has a lot of potential. Now really, spots 3 and 4 were kind of a tie for me. While Finn got more screen time than Poe, I liked Poe right from the start. He’s a great new character with plenty to love about him. Poe is one of the first characters we meet in the movie. He’s a cool guy with mad piloting skills and a lot of attitude. We’ve never had a lot of insight into any pilot before, aside from Luke, so Poe brings a new dynamic to the cast. Ren is the epitome of a bad guy we love to hate. Really, there’s not too much I can say about Ren without giving anything away so it’s difficult to share why I like him. After you have seen the movie, I’d love to chat and discuss this villain!

I have seen some reviews say they thought Ren was not as strong of a villain as we have seen in the past. I would disagree. I think he has plenty of potential and will end up proving his doubters wrong as his character progresses. 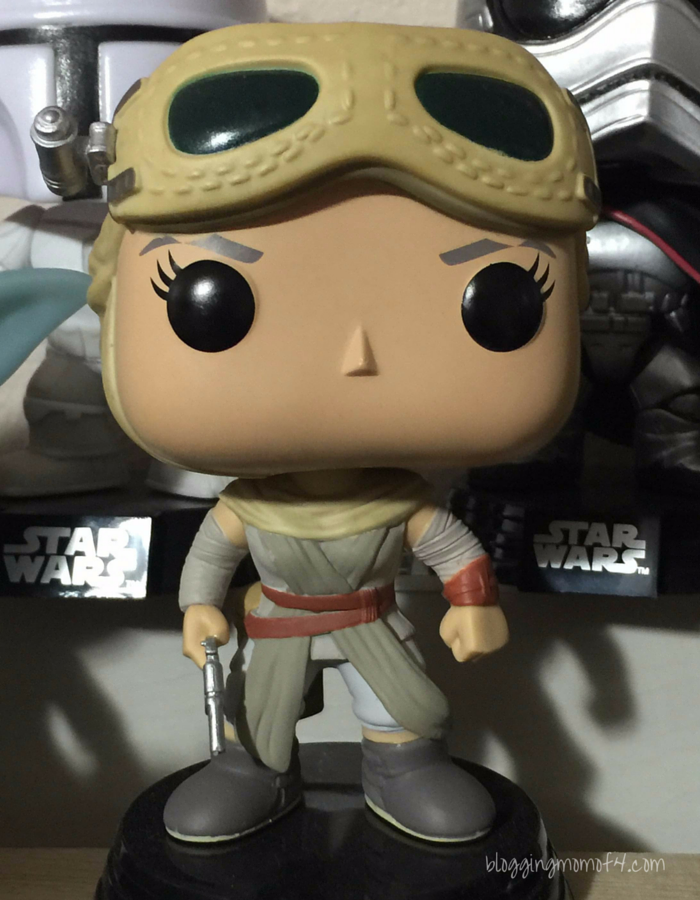 Rey is a strong female character the likes of which we haven’t seen since Princess Leia herself. I can picture girls all over the world looking up to this new heroine. She’s independent, brave and bad ass. (Can I say bad ass?) As with Ren, there isn’t much more I can say about Rey without giving away any spoilers.

Now as an honorable mention, I have to give spot 6 to Maz Kanata. Maz is a female pirate and a little spit fire. While she doesn’t have a large role in The Force Awakens, she lights up the scenes she’s in. Just a really fun, new character.

That wraps up my picks for the Top 5 New Star Wars The Force Awakens Characters. After you’ve seen the movie, come back and comment below with your favorites!

Photo Credit: Blogging Mom of 4 from our Pop Vinyl collection. 😉