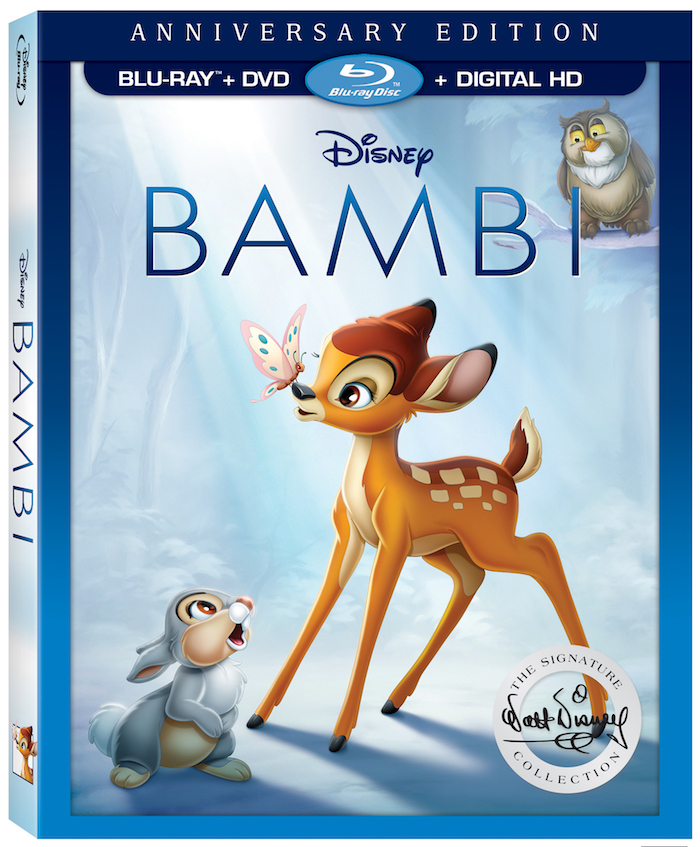 “Bambi” arrives home on May 23 with new bonus features, including recordings of Walt Disney!

Disney’s Bambi, which celebrates its 75th anniversary this year, joins the Walt Disney Signature Collection. The Collection release includes a variety of new bonus material, including recordings of Walt Disney discussing the challenges and triumphs during the production of “Bambi;” deleted scenes and characters; stories and effects that “Bambi” had on the Studio, other films and artists; and much, much more. Additionally, the Digital HD release includes an exclusive, heartfelt feature on the incredible artist, Tyrus Wong, who inspired the film’s soft watercolor backgrounds and beautiful palette. Bambi arrives home on Digital HD and Disney Movies Anywhere on May 23, and on Blu-ray™, DVD and On-Demand on June 6.

In a classic Disney animation, a fawn named Bambi joins his new friends, a young rabbit named Thumper and a skunk named Flower in happily exploring the woods. Bambi is captivated with a young doe named Faline, and he learns from his doting mother and his father — the Great Prince of the Forest — that besides the delights of the forest, there is danger in open meadows where hunters can see them. Though fear and tragedy touch Bambi’s life, another spring brings renewal.

Bambi is one of those all time classics that will never go out of style. Do you remember watching Bambi when you were a child? Now we can share it with our children. Bambi will live on from generation to generation.

Bambi is one of my all time favorites with lovable characters and a story of love and loss. We cry along with Bambi when he loses his mother and then fall in love with these adorable woodland creatures.

You won’t want to miss all of the bonus content included in the Anniversary Edition. From deleted scenes to facts and behind the scenes material.

BRAND NEW:
THE BAMBI EFFECT – “Bambi” was full of innovations for its time. Let’s take a look at how those past innovations affected future Disney animated titles all the way up to today.

STUDIO STORIES: “BAMBI” – Recordings of Walt Disney. Listen in on intimate moments where he discusses the challenges, pitfalls and triumphs during the production of “Bambi.”

DELETED SCENE: BAMBI’S ICE AND SNOW – Bambi coaxes Thumper and his brothers and sisters to come play on the ice during the first snow.

DELETED SCENE: THE GRASSHOPPER – A grasshopper confronts Bambi and Thumper and finds himself in quite a predicament.

BAMBI FAWN FACTS – Think you know everything there is to know about Bambi and his forest companions? Well, it’s time to discover some fun real-life facts about the creatures that live in the forest he calls home.

CELEBRATING TYRUS WONG (DIGITAL EXCLUSIVE) – A heartfelt look at the man who played a key role in the success of “Bambi.” Much like Mary Blair and Eyvind Earle, Tyrus Wong had a unique signature style all to his own. The soft water-colored backgrounds and beautiful palettes in “Bambi” were inspired by Tyrus’ concept art paintings.

Grab your copy of “Bambi” now on Digital HD and Disney Movies Anywhere and on Blu-ray, DVD and On-Demand on June 6th!