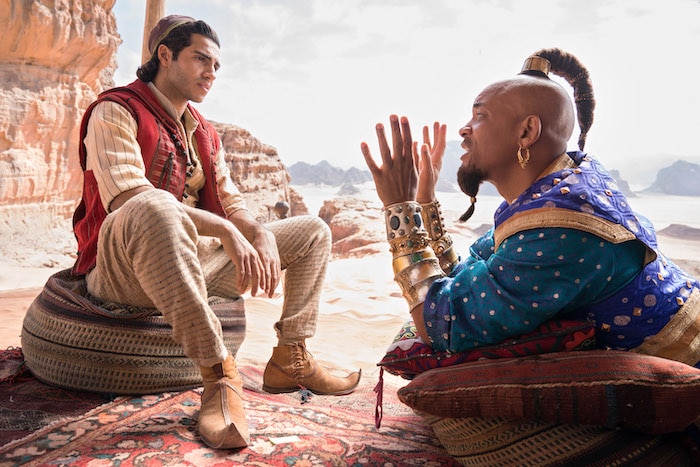 Mena Massoud as the street rat with a heart of gold, Aladdin, and Will Smith as the larger-than-life Genie in Disney’s ALADDIN, directed by Guy Ritchie.

Woohooo! I’m so excited. I just watched the first TV spot for Disney’s upcoming live-action adaptation Aladdin! Have you seen it yet? It includes new, never-before-seen footage and you get a good look at Will Smith as Genie.

Looks to have everything we love about the animated Aladdin plus more! I will admit, that I miss Robin Williams but am excited to see what Will Smith can do with the character. I think he’ll do an awesome job. We’ll find out soon enough.

We just didn’t have a chance to do a reaction video for this one but for everything else we’ve done, make sure to check out our Family That Games YouTube channel.

Watch this Special Look at Disney’s Aladdin below.

Let me know what you think in the comments.

A thrilling and vibrant live-action adaptation of Disney’s animated classic, “Aladdin” is the exciting tale of the charming street rat Aladdin, the courageous and self-determined Princess Jasmine and the Genie who may be the key to their future. Directed by Guy Ritchie, who brings his singular flair for fast-paced, visceral action to the fictitious port city of Agrabah, “Aladdin” is written by John August and Ritchie based on Disney’s “Aladdin.” The film stars Will Smith as the Genie; Mena Massoud as Aladdin; Naomi Scott as Jasmine; Marwan Kenzari as Jafar; Navid Negahban as the Sultan; Nasim Pedrad as Dalia; Billy Magnussen as Prince Anders; and Numan Acar as Hakim.

Hop on a magic carpet and go see Aladdin in theaters nationwide on May 24, 2019!