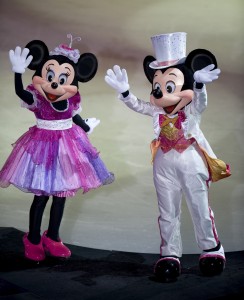 Disney on Ice Worlds of Fantasy

We are HUGE Disney fans so when I found out that Disney on Ice Worlds of Fantasy was coming to the Target Center in Minneapolis, I was excited. I knew my kids would be thrilled.

We were able to get tickets for our family and a set of tickets to giveaway on the blog.

Last night was the opening night. We set off after my husband got home from work. It’s about 1 hour 45 minutes from our house to the Target Center…usually. Little did I know the trip we had in store for us.

Let’s just say that our trip included 1 car sick kid, 1 stop along the way for clean clothes and cleaning supplies, and 1 stubborn GPS. A trip that should have taken us under 2 hours, took us 3 hours. So we ended up arriving late to the show. We arrived half way through Ariel’s performance.

I love how resilient kids are. No matter what our trip had been prior to this, the kids were loving the show. My youngest daughter had her phone out (my old iphone which is more like an ipod now) and was recording as much as she could. Even though our seats were pretty high up and the picture on the recording wasn’t really much, she was thrilled to be recording. She thought it was awesome. She was so excited to be able to take it home and show her friends.

Poor Caleb who had gotten car sick was doing much better. For whatever reason that he had gotten sick, he was fine now and enjoying the show. Abbie, who missed Ariel, was still loving Tinkerbell. Tinkerbell was actually my favorite part of the show. I imagine that I probably would have loved Ariel too because what we did get to see was pretty awesome!

It seems as if Cars was right in the beginning so we missed it. Bummer. I’m sure that would have been great! The last part of the show was Toy Story. The kids did enjoy it..more so Caleb than the girls. The girls really wanted to see more princesses.

In the end, I had smiling kids and that’s the reason we do what we do! 🙂

Here’s a show overview of Disney on Ice Worlds of Fantasy:

Come experience a magical Disney fantasy on ice!
Rev up for non-stop fun with four of your favorite Disney stories at Disney On Ice presents Worlds of Fantasy.  Thrill to high-speed stunts as Lightning McQueen, Mater and the crew ofDisney•Pixar’s Cars race across the ice. Dive into The Little Mermaid’s enchanting undersea kingdom and enter the mystical world of Pixie Hollow with Tinker Bell and the Disney Fairies as they reveal the magic that lies within! The toys are back in town with heroic action when Buzz Lightyear, Woody, Jessie, and the Toy Story gang escape from the rambunctious tots of Sunnyside Daycare and race for home, in their most daring adventure ever! From wheels to waves, playtime to pixie dust, your family’s favorite Disney moments come to life at Disney On Ice presents Worlds of Fantasy with dazzling skating, special effects and beloved characters certain to create a lifetime of memories.

Disclosure: I was provided the above product for review purposes only. All opinions are my own.