Sitting down with those involved with Captain America: The Winter Soldier was amazing. Such a wonderful experience. Yesterday I posted my interview with Cap himself Chris Evans. Make sure you check it out. You can also check back for interview posts with Anthony Mackie and ScarJo. Will be posting those soon! Hearing their thoughts on making CA:TWS was so fun! Seeing as I’m a huge fangirl and love all super hero movies, it was definitely something I’ll never forget.

I have the transcripts from the interview and picked out a few things from the Q&A to share with you. Take a look:

QUESTION : So this is my husband who I work with side-by-side every day so as brothers, what do you find challenging and do you work off of each others strengths?

Anthony : Without question, I mean, alright, there wouldn’t be a great partnership unless we compensated for, you know, each other, helped mitigated each others weaknesses and complement each others strengths. Um, we’ve been doing it for a long time now, about 15 years, there’s a real shorthand that we have. It’s not a very formal relationship, I know, like the Cohen Brothers, you know, divvy up producing and directing. It’s very specific. Ours is less defined than that. It’s we always say that if you’ve asked one of us a question and you get an answer then you got an answer from both of us. ‘Cause we share a lot of the same influences, obviously, we grew up together, we’ve read the same comics, we read the same books, we watched the same movies, watched the same television shows, so all of our influences are very similar. So when we look at material we tend to look at it in the same way and it–– it seems to make it very easy for everybody.

QUESTION : So you guys are primarily known for comedies. What was it about this, did you want to start something new or really interested in getting into the Marvel?

Anthony : Well once our comedy career got sort of up and running we always used to say, if you had asked us before we got started if we would ever be known as comedy directors we would have never guessed that. I mean, we didn’t sort of start off our directing career sort of like wanting, necessarily intending to be comedy directors. … our tastes run everywhere. I mean we shoot all kinds of things. We shoot TV, we shoot films, we shoot commercials, we shoot TV pilots … our tastes kind of run all over the map, just, uh, we like to explore everything as filmmakers. So the action genre is something that’s been on our agenda for a long, long time.

Joe : Well, it was a double whammy for us. When Marlo came to us and said, “Listen, are you interested in making Captain America – The Winter Soldier?” Uh– uh, once I started collected comic books when I was 10 years old and one of the first books I ever got was a Captain America Falcon Team Up so that’s like a 30-year dream come true for me to be able to make a comic book movie. Two, you know, we used to when we grew up with our father in the ’70s we used to watch The Late Show, we used to watch ’70s thrillers you know, he loved those movies. We’ve seen The French Connection 100 times. So when they said, you know, “it’s a comic book movie inspired by ’70s thrillers” we went out of our minds with excitement.

Joe : Favorite scenes, I love the relationship between Chris and Scarlett in the movie, I think that’s the real heart of the film. … they were extremely integral in the interpretation of those scenes, both Chris and Scarlett. Uh, they wrote some of their own dialogue. You know, they’ve been working together for so long I think this is their fourth film together and they’ve been really good friends for years. And so they brought all that energy and chemistry to the movie and I think it really i like the spark of life in this film. So those are the easiest and funnest scenes to work on …

Anthony: I would also add the scene with Robert Redford when he and Chris Evans when he’s in Nick Fury’s office. … well number one working with Robert Redford was certainly a career high secondly, it’s just such a great scene to just watch those two play chess with each other through that scene and watch Captain America be put in a position where he has to lie to somebody who’s like basically his commanding officer. It was just a really, really exciting interesting scene and then I’ll just never forget that experience.

Joe : And the hardest scenes are the action scenes, obviously. There was a scene that’s near the end of the second act where Winter Soldier attacks Cap and Natasha and Sam in a car on the freeway we had to shut down a freeway in Cleveland for two weeks to shoot that scene. If you could imagine in your own town if a filmmaker came in and said, “Hey we’re gonna shut down one of your major freeways for two weeks, what do you guys think?” Have fun getting to work, right? [LAUGHS] … there was a lot of pressure on us ’cause there was no room for error. … it was a very complicated sequence, you’ve seen the scene. and we had to get all that work from the time he lands on their car till his mask comes off. All that work has to be done in a two-week period. So he and I worked around the clocks 14-days straight…

QUESTION : Was there any certain amount of pressure knowing that, you know, Captain America’s Marvel film, was there any pressure with the fan base and make sure you got it right?

Joe: There’s always pressure with the fan base clearly it’s an intense fan base. But what something that we’ve learned in our career is that’s very important to us is that you cannot predict what people are going to like. You can only make the movie based on how you feel and what you feel you would want to see. And then you hope everybody else likes it too. Uh, and, because we’re comic book fans and film geeks, you know, our approach to the movie was, “What if–– if, you know, I’m finally getting the opportunity as a fan boy to make a comic book film?’ What do I want to see in a comic book movie?” And then we put all of that into the film. And you know, again, like I said, you just keep your fingers crossed. But, you know, you’re never gonna make everybody happy. I know when we came out with the , you know, we call it stealth suit or what’s the Steve Rogers suit, it’s the blue suit with the white stripe on it? You know, the Internet exploded, “How could they not have him in the, you know, the red, white and blue suit?” And you’ll see in a year when you see the film, it’s a very thematic use of the costume, and the movie is supposed to represent his work for the government, his work for shield and then he embraces the symbol of his old suit at the end of the movie in order to fight the bad guys. So you can’t, you kinda have to tune that out a little bit …

Anthony: Yeah and it’s like Joe mentioned a little bit, it’s important to remember, the fan base does not speak with a single voice. You find the entire spectrum of opinion. You know, there’s people who are fans of the Golden Age of the, uh, sort of version of the character and–– and then everything that came–– came after. So at the end of the day it’s like you just, you have to, because we are fans, because we love the material, it’s like, ultimately you just have to service yourself, you know, just–– just hope others like it. 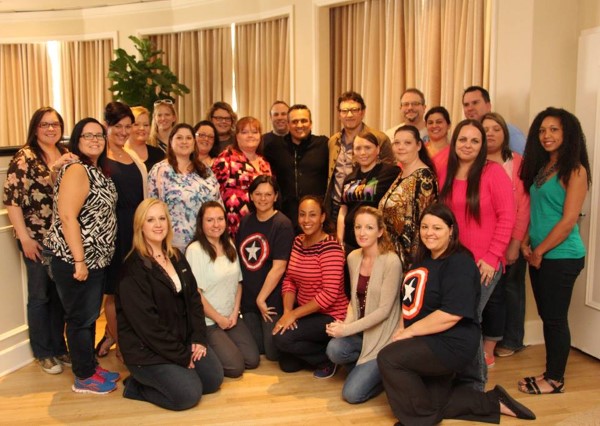 Don’t forget to check back for the rest of our interviews!