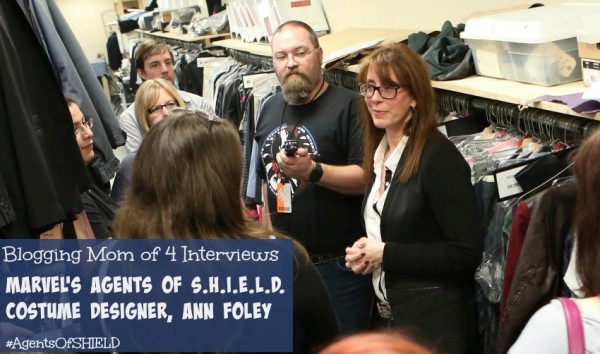 Ever wondered what goes on behind the scenes in the costume department of MARVEL’s Agents of S.H.I.E.L.D? While we were on set, we got an inside look from Costume Designer Ann Foley.

What an amazing job she has! Take a look at what we chatted about.

Upon entering the Costume Department, Agents of S.H.I.E.L.D. costume designer Ann Foley showed us her vision boards. They hung on the walls and walking further into the costume department there were the working closets of the entire cast. Some we were able to see included Coulson, Ward, Fitz, May, and others.

A closet, the working closet is where I pull their clothes for each episode.  I have a little closet that I use for all my fittings, for each and every episode.  In my vision board over there, these are ideas that I had at the beginning of last season that I used to show the producers and even the cast of where we were going with each one of them, so that we could create six really strong identifiable characters.

How awesome is it to have a job where you do a vision board as part of your job?

It was really fun.  It was really fun, and a lot of this stuff was inspiration for season one.  I have a few things up there for season two, and as most of you guys know, there was a big progression in the cast from season one towards the end and the fall of S.H.I.E.L.D., we went a little darker and everybody grew up.  So season two, it was a little darker.  It was a little edgier.  It was actually a fun, it was kind of a nice change.

Walking through the closet on our way to Ann’s workroom, she shared some more information on the clothing.

We saw Mockingbird’s coats from the first time we see her on screen ad Hunter’s leather jackets that he’s been wearing on film. We also saw Coulson’s ties and suits, along with the permanent working stock, including budget suits for her S.H.I.E.L.D. agents.

What kind of background do you have in a typical episode?

It depends. We could be shooting somewhere in Europe. Last year we had a really fabulous, probably one of my favorite episodes, was when we were in Russia and we did a little Russian bar. That was amazing. So that’s what we do. We pull from my permanent stock to address…

Do you have measurements for everyone that comes in?  Do you know the sizes?

For specific background we get their sizes and then we pull clothes specifically to them.  Definitely for the cast.  Any day players that come in, I get their sizes, everybody comes in for a fitting.  Every single person on the show pretty much, whether they have one line or they have a big arc, they come in and I dress them all. Upon entering her workshop we see the sequined dress that Ming-Na wore (the short, silver one) and a dress that Raina wore (blue printed with black flowers).

This is where we build a lot of costumes on the show. The costumes up on mannequins that we’ve made here in-house. One being Raina, the girl in the flower dress. She’s probably one of my favorite characters. We actually print that fabric and then we make each one of our dresses. What we did with her is I really worked with the writers and we sort of went into her head, and depending on where her head was in that episode, we tried to choose that color wisely.

They’re all 100 percent custom made and those, that’s special to our show.  Then that’s Ming’s silver sequin dress that we made that in-house, too, which was so much fun.  It was so much fun putting her in that.  We had about a week to make five of those dresses.  Those tiny sequins that you see on there, we were finding those sequins all over studio. They were everywhere.

Why did you have to make five of them?

We made five because Ming was fighting herself, or May was fighting herself in the episode, so we had one beautiful one for May, then we had one that she could fight in, so we, sewed stretch panels inside so she could fight and do all of her movement.  She had two stunt doubles and then Agent 33 was in one as well.  Yeah, so that was a lot.  Then we have Skye’s new tactical outfit for this season, and the hood piece up there is her custom made.

Then of course Mockingbird.  That’s another one of my favorites this season as well.  Here’s some illustrations that we have. My fabulous illustrator, Phillip Boutte, who I’ve been working with on both seasons and here’s the latest and the greatest, which is our friend Deathlok, who you guys saw on Tuesday night’s [episode].  I wish I could have put him up, but he is not available to be put up yet. [She had photos/sketches of Deathlok’s suit on the wall]

What percentage of the costumes are custom made?

It’s hard to say. It depends on the episode. 30 percent.  I could be higher than that, but I don’t want to, I’ll skew lower.  It does feel like we’re making a lot of stuff back here and I love to do that. Even Raina, who is coming up, we’ve made a lot of stuff for her and we’ll continue to as well.  It just depends on the needs of the character, because sometimes you just can’t find it at Bloomingdale’s.

We made this really beautiful, it’s another hooded piece because she [Raina] needs a hood for her protection. Even if it’s an emotional protection, so to speak.  You know it just felt right.  I found this really beautiful, it’s an Asian-inspired lace and we put a red, silk underneath it so that you could see the red coming through the flowers that are in the lace.  So she still keeps her flowers.  It’s very subtle.  Hopefully you’ll be able to see it, but it’s just, it’s a character thing.

How many outfits average in an episode?

That depends on the cast involved.  Sometimes, we have up to 38 people in the show that we’re outfitting.  The episode with Ming and the dress, our cast was about 38.  And then we’re doing the multiples on top of it, so it varies.

A bunch.  I always go to the source material, because I think it’s important.  These are established characters in the Marvel Cinematic Universe and I want to respect that.  But at the same time, it’s about bringing them into our world  and making it believable for the world of Agents of S.H.I.E.L.D.  So, it’s always a little bit of a balance.

Have there been any characters that have been especially challenging?

There’s always gonna be a challenge, even if they’re in street clothes.  But I never really look at it as a challenge.  It’s just another aspect of it.  I love building costumes.  I love shopping them as well. I’ve been very lucky in my assistant designer career.  I’ve worked on some amazing films that, that’s all we did was build.  We were in completely different worlds.  And so it just kind of second nature to me.

How much lead time do you get?  Actors may not know what coming up until the episode before, but costume is different?

Mockingbird, I got about two months. Same with Deathlok.  Ming in the silver dress, about 10 days.  Yeah.

What considerations do you have to take for stunt doubles, fighters, and things like that?

What kind of system do you have when you need to find a few pieces for each character?

I have some fabulous shoppers on the show.  And also I am a big online shopper.  I’m gonna give a big shout out to Shopbop and Net-A-Porter and Mr. Porter.

Talk about the job of shopper.

To shop all day long. It’s great, because we know the characters now, and I think the bigger challenge was at the end of last season and starting this season when we started going darker and edgier, was trying to find that idea of all of the characters. For example Elizabeth Simmons, to me is probably one of the more challenging characters to shop for on the show because she is eclectic.

So it will be one piece from this store, one piece from that store and it’s just about styling her and bringing her together without any of them getting, going over the top, ’cause it, the challenge for me, I guess, going back to your original question is keeping it believable, keeping it real, and not having it be over the top.  And, people getting distracted by what the cast is wearing.

Who is the easiest to dress?

I know them all so well that it’s not that hard.  Yeah.  I guess the harder part is maybe finding those pieces that identify each character, because I can be a little, if you ask my shoppers, I can be a little picky.  They’d probably be able to answer that question better than me.

Coulson is so identified by his suit and his armor.  When he’s out of it, you have to decide if he’s in a tac vest or something else.

That’s very true.  That’s the fun part, because Coulson is always in a suit, so when I get to get him out of the suit, it’s funny because the, Twitter loves it.  They love seeing Coulson undercover.  I think that’s probably one of the most fun things for me, is when I get those episodes and everyone’s under cover.  I only had a short lead time on that dress [May’s], but it’s so much fun.

Sometimes it makes me laugh.  Last season, when Coulson and May went undercover as Fitzsimmons, …probably the best fittings I’ve ever had in my life because Elizabeth has a very specific way of standing in her fittings and Ming did that in the fitting photos for the cast.  You could hear her laughing across the studio.  It was wonderful.  I was really fun.

Do you have a hard time shopping for yourself?

Oh, no. If you see my, if you see my twitter handle, you’ll see it.  It says shopaholic.  Yeah.

Do you come home with things for the show when you’re shopping for yourself?

Well, I’ve been shopping for so long as a costumer and assistant designer, I’ve always been guilty. I will go to Barney’s and it’s like oh, this is for the show.  Oh, I need one of those, too.  I try not to do that, otherwise I’d be like Carrie Bradshaw from Sex and the City.  I can’t buy my apartment when it goes condo, but I have a fabulous closet.